The “education reform” sweeping the nation right now isn’t reform at all. It’s privatization and deregulation. Part One explained privatization and deregulation and explored the billionaires and corporations pushing for it. This section explains the strategy they’re using: using nonprofits. Part Three will show how the different aspects of “education reform” work together as a process — and how it can be stopped!

How Do They Get Power?

Billionaires and corporations exert their influence and push for privatization using a myriad of strategies, some obvious and some not. They can directly lobby the state and federal government for change. Through ownership of mass media, they can also put out PR in favor of privatization and deregulation, thereby swaying public officials and voters. Those strategies are fairly obvious.

But some of the ways that billionaires and corporations exert their influence are not so obvious. In fact, they’re deliberately hidden. The rich and powerful use a variety of strategies to influence the government (at the federal, state, local, district, and school level) and the general public. Then they hide those strategies and their influence by acting through a nonprofit or grassroots group, which they have either created out of thin air or manipulated using a grant with strings attached. The nonprofit or grassroots group then manipulates the government and the general public.

Figure 1 shows how this influence works to divert the public from its goal of improving and fully funding schools to the corporate goals of privatizing and deregulating them. 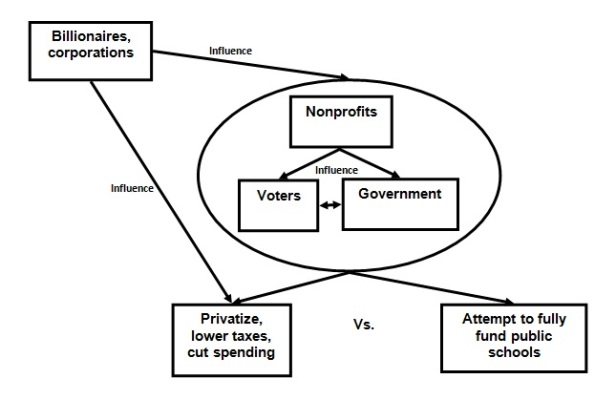 This strategy is as effective as it is despicable, because it takes advantage of our quite reasonable expectation that nonprofits work for the greater good and this influence works to divert the public from its goal of improving and fully funding schools to the corporate goals of privatizing and deregulating them.

How Billionaires and Corporations Influence the Public

Billionaires and corporations direct the activities of nonprofits and grassroots groups through philanthropic foundations. For example, the family that owns WalMart has the Walton Family Foundation, Bill Gates has the Gates Foundation, and the owner of the Gap has the Fisher Foundation. These foundations can then create or fund a nonprofit and then influence that nonprofit by making grants with strings attached or buying a seat on the board of directors. Then they use that nonprofit to push, tax-free, for policy changes. Foundations and nonprofits can also create astroturf (fake grassroots) groups that urge their constituency to lobby for policy changes.

Even worse, foundations and nonprofits contribute to existing, trusted nonprofits and grassroots groups, encouraging the group to participate in one small, innocuous-seeming “Trojan horse” activity that pushes for privatization without the members of that group knowing how the activity contributes to the bigger picture. For instance, a push to deregulate teaching can be sneaked into legitimate efforts to improve teaching.

This isn’t just hypothetical. There is direct evidence that this is currently happening in many different nonprofits and grassroots groups. Through foundations, billionaires and corporations are pushing for privatization and deregulation by:

A few examples of their activities are:

Taken together, these activities and others like them work together in order to build a larger process of privatization.

Part Three of this three-part article will show how the different aspects of “education reform” work together as a process — and how it can be stopped!