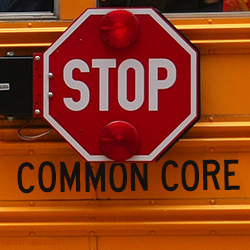 From The Fatal Flaw of the Common Core Standards by Diane Ravitch:

The reason to oppose the Common Core standards is because they violate the well-established and internationally recognized process for setting standards in a way that is transparent, that recognizes the expertise of those who must implement them, that builds on the consensus of concerned parties, and that permits appeal and revision.

Across the nation, parents and educators are raising objections to the Common Core standards, and many states are reconsidering whether to abandon them as well as the federally-funded tests that accompany them. Arne Duncan, Jeb Bush, Bill Gates, the U.S. Chamber of Commerce, and the Business Roundtable vocally support them, yet the unease continues and pushback remains intense.

Why so much controversy?

The complaints are coming from all sides: from Tea Party activists who worry about a federal takeover of education and from educators, parents, and progressives who believe that the Common Core will standardize instruction and eliminate creativity in their classrooms.

But there is a more compelling reason to object to the Common Core standards.

They were written in a manner that violates the nationally and international recognized process for writing standards. The process by which they were created was so fundamentally flawed that these “standards” should have no legitimacy.

Setting national academic standards is not something done in stealth by a small group of people, funded by one source, and imposed by the lure of a federal grant in a time of austerity.

There is a recognized protocol for writing standards, and the Common Core standards failed to comply with that protocol.

In the United States, the principles of standard-setting have been clearly spelled out by the American National Standards Institute (ANSI).

On its website ANSI describes how standards should be developed in every field. The American National Standards Institute

“has served in its capacity as administrator and coordinator of the United States private sector voluntary standardization system for more than 90 years. Founded in 1918 by five engineering societies and three government agencies, the Institute remains a private, nonprofit membership organization supported by a diverse constituency of private and public sector organizations.”

“Throughout its history, ANSI has maintained as its primary goal the enhancement of global competitiveness of U.S. business and the American quality of life by promoting and facilitating voluntary consensus standards and conformity assessment systems and promoting their integrity. The Institute represents the interests of its nearly 1,000 company, organization, government agency, institutional and international members through its office in New York City, and its headquarters in Washington, D.C.”

ANSI’s fundamental principles of standard-setting are transparency, balance, consensus, and due process, including a right to appeal by interested parties. According to ANSI, there are currently more than 10,000 American national standards, covering a broad range of activities.

The Common Core standards were not written in conformity with the ANSI standard-setting process that is broadly recognized across every field of endeavor.

If the Common Core standards applied to ANSI for recognition, they would be rejected because the process of writing the standards was so deeply flawed and did not adhere to the “ANSI Essential Requirements.”

To read this post in full, go to Diane Ravitch’s blog.

The way I see it is the same.  There was never any buy-in by educators, parents of students, in fact, we were all kept in the dark about what the standards were to be. Gates bought the teachers’ unions and they went along with the Common Core Standards, that was the buy-in.

I don’t think anyone except Arne Duncan, Bill Gates and the test meisters knew what we were in for in terms of assessments when states signed onto the Common Core Standards. No one knew the amount of student information that was to be turned over to data banks without the knowledge of or approval by parents.

The way this was all done is typical Gates. Think about how he pushed software into computers to the point where anti-trust laws were broken. He pushed software onto users by way of having software pre-loaded into the computers. No transparency and no choice in the matter by consumers.

This is his MO.

2 thoughts on “Diane Ravitch: The Common Core Standards “should have no legitimacy””