I sat in on my first Families and Education Levy Oversight Committee meeting yesterday and the one thing that struck me the most was the useless jargon bandied about, phrases such as:

The idea that any outside factors might be involved in a student’s performance had no place in the discussion. It was all about test scores and the “effectiveness” of teachers and principals based on the student test scores as if teachers could wipe away hunger, the effects of poverty, the emotional and physical stress of homelessness or strife at home, illness, learning disabilities or the fact that a child is new to the English language.

Those human factors and others were ignored.

The following article beautifully describes what is happening in Seattle and around the country. 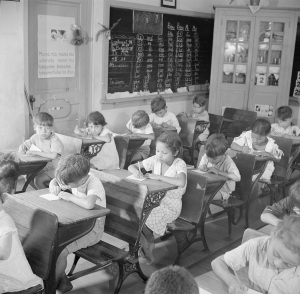 The jargon of school reformers only masks the poverty that stifles student achievement.

Rarely has a dull, technical document created as much controversy as the Common Core State Standards for English Language Arts & Literacy in History/Social Studies, Science, and Technical Subjects. Everyone from parents and teachers to politicians and op-ed columnists is debating the merits of the Common Core, though it’s unclear how many of them have actually read the full book-length document.

But who can blame them, when the standards are full of sentences like: “Part of the motivation behind the interdisciplinary approach to literacy promulgated by the standards is extensive research establishing the need for college and career ready students to be proficient in reading complex informational text independently in a variety of content areas?” It’s not a fun or illuminating piece of literature, but it is a great example of the type of jargon that has taken over America’s public schools.

Before the next semester begins in January, these teachers will be required to submit their “UBDs” to their supervisors for approval. (UBD stands for “Understanding by Design, a trendy new term for “unit plan.”)

Each UBD must contain a list of “essential questions,” “enduring understandings,” “exhibition descriptions,” and rubrics for student assessment. Additionally, each UBD must explain which “Habits of Mind” the unit focuses on, which “active reading strategies” and “graphic organizers” will be applied throughout the unit, and what efforts the teacher will make to create UBDs that are “student centered.” Of course, teachers must also identify which Common Core standards will be addressed throughout every single unit, lesson, and task the students complete.

The jargon doesn’t end with the Common Core and curriculum. Throughout the year, when students misbehave, teachers must follow the protocol laid out by their schools’ “ladder of guided discipline.” They will document students’ “problem behaviors” in “low inference” language — describing “just the facts,” a rather illusory proposition — as well as which interventions they have employed to address the problem behaviors.

Since it’s possible that a teacher’s ineffective pedagogy is triggering the problem behaviors, they must make sure they have fully differentiated their instruction to meet the varied learning needs and multiple intelligences that their students present.

If teachers’ interventions adhere to protocol yet fail to yield results, they should engage other school-based professionals in a conversation about how best to support student learning and ensure that each and every student in her class is on the path to success.

If a teacher fails to complete any of these steps, or in any other way displeases her principal — perhaps by refusing to supervise test-prep sessions on the weekends or attending union meetings — she risks being rated “unsatisfactory,” which could lead to “termination.”

The rise of jargon is not accidental. One of the key goals of the school reform movement is to exclude the public from educational policy. That’s why reformers have aggressively advocated mayoral control and the privatization of massive urban school districts like Detroit and New Orleans. By using needlessly technocratic language (see “relevant stakeholders,” “high-impact strategies,” and “culturally sensitive manner”), reformers are able to pursue an anti-democratic agenda without ever being pressed to clearly articulate tangible goals.

Neoliberal education reformers’ use of vague hyperbole about “failing schools” and the “achievement gap” works in concert with meaningless phrases like “the times have changed — our schools need to change with them.” Reformers have overwhelmed parents and the public at large with the general impression that “our teachers are bad and change is good.”

Beyond confusing and misleading the public, jargon obscures the fact that when we talk about schools, we’re talking about places where children live and grow for seven to nine hours a day, ten months out of the year. If they’re poor, these children spend their days in overcrowded classrooms that are poorly lit and poorly ventilated.

My first two years teaching in the public schools, I worked at a high school where students spent their entire school day, five days a week, without ever leaving the building. These teenagers received a single thirty-minute break each day for lunch and recess combined. Their recess consisted of milling about the school cafeteria after eating. Jargon reduces these pent-up children to abstractions and effaces the brutality of this type of captivity.

Just as jargon obscures the inhumane conditions in which students learn, it obscures the degree to which management has made the workplace a hostile environment for teachers.

At the same time states across the country were rushing to adopt the Common Core, they were also adopting a new tool for evaluating teachers: the Danielson Framework. Like the Common Core, the framework is so laden with technocratic language that one might imagine its sole purpose is to confuse its readers. And as with the Common Core, if a teacher does not meet its demands, she may be out of a job.

Taking its name from the education consultant Charlotte Danielson, the framework divides the teaching process into four “domains”: “planning and preparation,” “classroom environment,” “instruction,” and “professional responsibilities.” Each of these domains is then broken into four or five subcategories ranging from “using questioning and discussion techniques” to “showing professionalism.”

Subcategories are then separated into a series of components. For example, the components of the subcategory “participating in the professional community” are: “relationships with colleagues,” “involvement in a culture of professional inquiry,” “service to the school,” and “participation in school and district projects.”

Danielson describes “proficient” (tolerable) instruction in the “communicating with families” subcategory of the “professional responsibilities” domain as follows: “The teacher provides frequent and appropriate information to families about the instructional program and conveys information about individual student progress in a culturally sensitive manner.”

This is the language of school reform. It is a language so riddled with unintelligible, meaningless talk as to be all but indecipherable to speakers of plain English. More than that, by imposing the language of management upon the classroom, reformers have also imposed the profit-driven ideology of the corporate world.

US Secretary of Education Arne Duncan provides another good example. In an interview with Target’s online magazine, he describes how private businesses can help fix America’s allegedly failing public schools:

It is going to take the sustained involvement of every stakeholder group, at every level – local, state and national – to transform education for the 21st Century. Private sector partners can help ensure that state and local investments go to projects that have the strongest data and show the greatest impact – or, that help move the field forward by building a stronger body of evidence. They can also support and encourage work already happening in schools.

The private sector can do so much to promote high-impact strategies, develop company-specific initiatives, and collaborate with relevant stakeholders to focus more than ever on excellent, evidence-driven, publically accountable education reform.

Reformers have argued loudly and aggressively that our schools and students are failing. But the language they use is by necessity obscure and technocratic, because no matter how emphatically they argue that America’s students are falling behind their international counterparts, the data repeatedly show that when studies control for the effects of poverty, American students are competitive with the top percentile of students in the world. And a 2011 Stanford University study found that family income continues to be far and away the biggest determining factor of student achievement.

Make your way through the jargon about achievement gaps and teacher accountability, and the problem becomes clear. Nearly a quarter of all children in the US live in poverty, among the highest rates in the developed world. Combine this with the fact that in America, poor students receive less educational funding than rich ones and you have a real civil rights issue: the U.S. government discriminates against poor children.

In this context, discussing how teachers should align their curricula with the Common Core or how to teach effectively under the Danielson system is akin to debating the ergonomics of segregated water fountains. It distracts us from the problem of poverty and offers tacit approval to a discriminatory system of school funding.

In The Elements of Style, E.B. White wrote that “muddiness is not merely a disturber of prose, it is also a destroyer of life, of hope.” By using impossibly complicated language, school reformers create the impression that improving school conditions for poor children is impossible. Given the muddiness of the language around educational policy, it’s no wonder that so many people have given up on the public schools.

But, as George Orwell noted, “from time to time one can even, if one jeers loudly enough, send some worn-out and useless phrase … into the dustbin where it belongs.”

The list of worn-out phrases is long: “evidence-based practices,” “hold teachers accountable,” and “informational texts” are just a few bits of jargon we must send to the dustbin. When we hear these phrases, we may jeer, as Orwell suggests, but we must also insist that the conversation focus exclusively on poverty and its cancerous effects.

The problem is poverty. The rest, as they say, is noise.