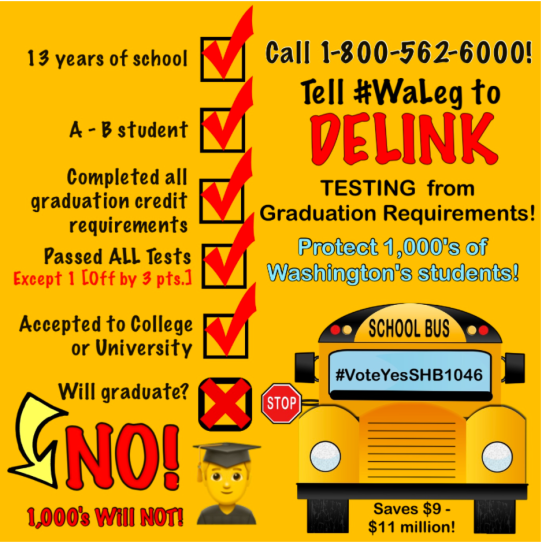 I am writing to encourage everyone who values the 13 years of hard work completed by students as they reach their senior year to call their state legislators. My request is simple: ask your legislator to pass HB 1046. This bill will serve to delink all high stakes testing requirements in all subjects from high school graduation.

While this bill does not eliminate the state tests, it DOES eliminate the high stakes attached to these tests, which is a big step forward in supporting students whose futures have been severely damaged by high stakes testing.

In 2013, Seattle Times writer Donna Blankenship notified her readers about some stark facts tied to the state’s End of Course Math tests:

“But that doesn’t make life any easier for the nearly 7,000 students in the Class of 2013 who have yet to pass the newly required math test and didn’t get their diplomas last month.”

2013 was the first year the state required students to pass an end of course math test in order to graduate and earn their diploma.

This got me thinking. Since 2013, how many students in Washington State have been denied a diploma for failing a high stakes tests required for graduation? I don’t see the numbers posted clearly anywhere, despite the state’s creation of these high stakes.

It gets worst. In 2017-18, students will  be required to pass three high stakes tests in order to receive their diplomas, per OSPI: 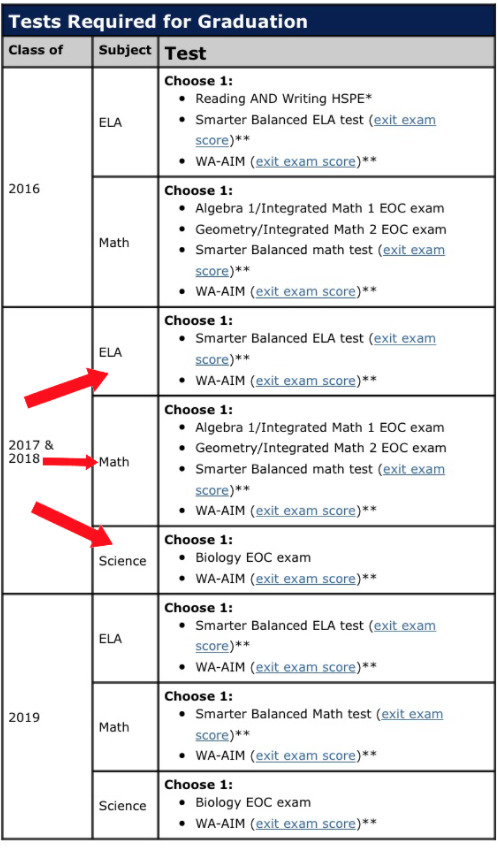 I wrote OSPI and asked them about the number of students who will be denied a diploma because of end of course tests required by the state. After all, we know approximately 7,000 students were denied graduation in 2013 because of one math test. What will happen when three tests are required?

I have a question about SHB1046. Does OSPI have an estimate of how many students will fail to graduate if testing is not delinked from graduation, please?  How many failed to graduate last year due to testing?

15,645 students in Washington State are at risk of being denied graduation after investing 13 years of their lives in school.  In years past, a child attended 13 years of school, received passing or failing grades by their professional educators, earned their credits, and graduated with their diploma.

“I estimate based on there being 1.1 million students in WA that there are 70K-75K seniors that means that about 20% of current seniors are waiting on test scores to know if they can walk at graduation in 4-5 weeks. That is an inappropriate level of stress for a 17 or 28 year old to carry while still faced with AP exams, final exams, and final plans for beyond high school.

Until large numbers of kids are actually impacted everyone will continue to believe it will all be ok.”

I think Shannon makes a great point: What about the ordeal our kids experience just by taking these high stakes tests, knowing graduation is on the line? As adults, it’s sometimes easier to ignore rather than face the pressure these tests place on our kids.

For instance, did you know some students find these tests so stressful there’s an actual protocol for what to do should a student vomit on a test? That’s a lot of pressure. When was the last time you vomited at work over the pressure you felt to perform? I’m guessing this would be a highly unusual occurrence, not likely covered by a particular protocol in the employee handbook.

And what’s the message we’re sending to those kids born without the very particular gift of being a good test takers? You only have value if you can score high on a standardized test?

The State Board of Education is offering a compromise solution: delinking the biology end of course exam, while continuing to use the other end of year course exams as graduation requirements.

As an educator, I want ALL students who have otherwise completed their graduation requirements based on grades and credits earned to receive their diplomas – despite failing one or more of any of the three high stakes tests imposed by the state.

And what happens to the chances of bright futures for those left behind?

“High school exit exams (FairTest, 2008) push many thousands of students out of school. As a result of these factors, urban graduation rates decreased. Some students see no realistic option other than dropping out; some are deliberately pushed out or fail the tests. Either way, these young people are much more likely to end up in trouble or in prison. One study found that high school exit exams increase incarceration rates by 12.5 percent (Baker & Lang, 2013).”

Sadly, youth who are unable to acquire a diploma are often relegated to minimum wage employment, live with state support through DSHS, or become homeless. In 2012, for example, DSHS reported that 69% of their “Opportunity Youth” did not have a high school diploma.

And what about earnings for youth who do not receive a high school diploma?

PBS Frontline reports in Dropout Nation by Jason Breslow and per the 2012 US Census here:

“The challenges hardly end there, particularly among young dropouts. Among those between the ages of 18 and 24, dropouts were more than twice as likely as college graduates to live in poverty according to the Department of Education. Dropouts experienced a poverty rate of 30.8 percent, while those with at least a bachelor’s degree had a poverty rate of 13.5 percent.

Among dropouts between the ages of 16 and 24, incarceration rates were a whopping 63 times higher than among college graduates, according to a study (PDF) by researchers at Northeastern University. “

Are we OK with throwing away the futures of kids who are unable to perform on high stakes tests – after they’ve devoted 13 years of hard work to their education? What message does this send to kids about hard work when it doesn’t payoff and they end up rejected by the system.

By delinking ALL high stakes tests from graduation we can protect thousands of students in Washington from being denied their rightfully earned diploma for simply missing a few questions on a test.

Also by delinking these tests from graduation requirements, we will also save our state between $9-$11 million dollars. Money that could be better spent on actual teaching vs testing.

Call 1-800-562-6000 and ask your legislators to protect our students by delinking high stakes testing from graduation – vote YES on SHB1046! Delink them all! Give our youth the bright futures they deserve!

-Susan DuFresne – Integrated Kindergarten Teacher with General Education and Special Education endorsements – 7 years in the Renton School District, Teacher of Professional Conscience, Co-Owner of the Opt Out Bus, Social Equality Educator, Artist, progressive and social justice education activist, unionist, mother and grandmother – The views I express are my own and do not reflect the views of my employer. #FreeSpeech

One thought on “Why Delinking Graduation from the Smarter Balanced Assessment & Other Tests is the Right Thing to Do.”