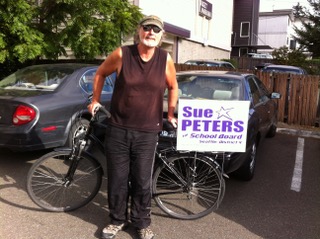 When someone like David Fisher dies, a light goes out in the world.

Those who followed my political campaign in 2013 may remember a pivotal moment at the 37th District Democrats forum when my opponent and I were asked to name our main contributors. (As some may recall, this was an historic race: my opponent and a PAC in her name spent more than in any school board race in Washington State history — $240,000, to my $41,000.) My opponent fudged and suggested her parents, mentioned some stranger on the street who gave her $6 and somehow forgot to mention the tens of thousands of dollars that were contributed to her campaign by corporate CEOs and education privatizers like Jeff Raikes, Nick Hanauer, Christopher Larson, Steve Ballmer – names one isn’t likely to forget. In contrast, my biggest contributor was standing at the back of the room earnestly watching the forum: a dedicated retired teacher named David Fisher.

His death was a mistake, a slip, a fall. But I like to think it was Dave being Dave – finding an unconventional answer to a problem. Trying to climb into his apartment window when he didn’t have the key. I can’t bear to think about the details. Instead I see the unbridled smile, the dimples, the sparkling eyes, the wild Pied Piper hair and clothes, and the endless energy.

Two magic topics for David were mathematics and music, and the interconnection between them. He was fascinated by the relationship between the two and convinced that the knowledge of one enhanced the knowledge of the other. There are indeed studies that support this theory. He was an out-of-the-box, expansive thinker, who brought together many disparate facets of knowledge and life into one tapestry he was trying to weave, sometimes apparently in the air right before your eyes. He was writing a book – a text book but unlike any other you might encounter.  It connected numbers and images and music and math and myth and symbols and— He asked me to read the draft and offer feedback, and so I did. It was fascinating, composed of a whirlwind of thoughts that could not be easily lassoed. He was planning to establish a music camp for young musicians — a promising project that will go ahead.

I think the last time I saw David was at a Seattle School Board meeting earlier this year where he was part of a group rallying in support of Ethnic Studies. He was always fighting the good fight, the right fight. And he was unpretentious, authentic and courageous. One of his last acts was a lively conversation at a political event where he challenged the influence of the Alliance for Education in Seattle Public Schools – in front of one of the founders. He was extremely generous, with his time, his energy, his enthusiasm, his money.

In his professional career, David was a math teacher at Cleveland High School in Seattle, and active in the teacher’s union. He was one of a few teachers selected by the Gates Foundation to be flown to other states to visit smaller high schools, during Bill’s (laudable but short-lived) Small School Stage. It was all well and good, but once Gates changed his mind and left the schools without funds, they fell apart. David was not impressed. (Nor were other teachers I have spoken to who also experienced the riptide of philanthropic funds being drained away.) David opposed “fuzzy math” and saw firsthand that class sizes matter — students fared far better in classes of 20 or less. “What I remember most about David’s teaching at Cleveland, he would always arrive early in the morning to tutor students — and always stayed late to tutor as well,” recalls longtime friend, fellow teacher and former School Board Director Sally Soriano.

And so here we are, about 20 years too soon bidding David Fisher adieu. Too many of the good people are being taken from us. I thought the dreadful losses of the annus horribilis of 2016 (including my own father) were behind us. But no.

David cared deeply about education and kids, and truly engaging curriculum, and vision, and music and so many things. Such a terrible loss for us all. But such a spark he was. And that is what we should remember.

Here’s a link to David’s obituary in the Seattle Times.
Advertisement