Editor’s Note: On May 8, 2018, Washington State’s Governor, Jay Inslee, appointed Suzi LeVine as the next commissioner of  the state’s Employment Security Department.

Suzi LeVine is a brand evangelical for career connected learning which is all about catering to the needs of business, by creating “an employer driven system of education and training.” This is bad news for kids and schools.  -Carolyn Leith

…And so, what can companies do together to create an environment where you can train and grow your talent pool instead of stealing talent from each other? Why not grow the pie instead of eating each other’s pieces of pie?”

In a simpler time, big time money bundlers in Presidential elections were satisfied with a plum ambassadorship.

In GeekWire, LeVine explains how her corporate background in tech helped her grasp the value of Switzerland’s apprenticeship program – an education system which helps companies train and grow their own human capital. LeVine sees this as a big plus because it keeps companies from competing – or poaching – each other’s talent.

“The work that I did at Microsoft around education and seeing education models around the globe gave me an appreciation for project-based learning and 21st-century skills,” LeVine said. “And seeing how in Switzerland apprenticeship is embraced, and 2/3 of young people go to apprenticeship and not high school, is amazing. But I can appreciate it in a way because of my tech background. What I can also appreciate is that these individuals have a path, not an end. They can go from their apprenticeship to university and beyond if they choose.”

In the U.S., LeVine believes we are at the beginning of an “apprenticeship renaissance,” where people realize that the path to success has many beginnings  that don’t all start with a college degree.

“I look at the tech industry here. And we are so hungry for software developers and so hungry for IT professionals,” LeVine said. “How many of those people who you know who are software developers today would have loved to have started younger because they knew exactly what they wanted to do, and really they would have preferred to go and start working and earning a paycheck and having this experience? And so, what can companies do together to create an environment where you can train and grow your talent pool instead of stealing talent from each other? Why not grow the pie instead of eating each other’s pieces of pie?”

Since returning to the United States, LeVine has been on a mission to introduce career connected learning in Washington State. Here’s notes from her presentation to the STEM Education Innovation Alliance meeting on March 1, 2017.

Learning from the Swiss about Apprenticeship

-Keys to success for the Swiss:

-Business must lead on this – and business benefits greatly from it

-Currently 5.8 million jobs unfilled in the US

-Some are returnees or re-trainees to update skills

-How do we mobilize in Washington state?

*What are fixed costs and long-term return on investment? loyalty – one example 50-80% retention after apprentices leave (civil service requirement); going into system but not necessarily in one place – salary to apprentice; mentorship; training

*Regarding adult reengagement – can do apprenticeships through age 48 in Switzerland though emphasis is on youth apprenticeship – relevance in US for older apprentices is greater. Each state has career advising offices.

Kids as Capital and School as a Workforce Development Pipeline

As mentioned in LeVine’s presentation above, the implementation of the Swiss Model is further along in Colorado. In the document Swiss Apprentice Model: An Employer Driven System of Education & Training – a title which is telling enough – one slide gushes about the many ways employers receive a return on their investment. 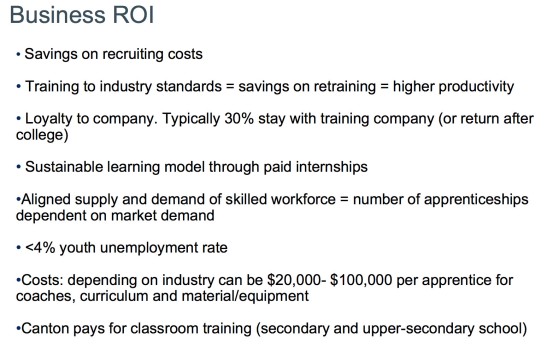 I hope both of these examples make this point crystal clear: LeVine’s proposed rearrangement of our public education system prioritizes the needs of Corporate America over students.

In fact, students are almost an afterthought, a raw material to be sorted and developed based on how much future value they can create for their employer.

This isn’t about creating jobs and opportunities for kids – that’s the sales pitch.

What career connected learning is really about is catering to the needs of business, by creating “an employer driven system of education and training.”

Remember: “Business must lead on this – and business benefits greatly from it.”

Could this Be an End to the McCleary Debate?

The other critical detail of the Swiss Apprentice Model is the emphasis on the savings created when 2/3 of students choose an apprenticeship program over high school.

In LeVine’s talk she estimates a savings of $668 million if companies in Washington pitched in an initial investment of $4.2 billion.

…Washington could save an estimated $668 million if two thirds of all high school students participated, with an investment of $4.2 billion (1% of GDP) in apprenticeships by companies in Washington state.

Where are these savings coming from?

I’m guessing money will be freed-up by closing and/or consolidating public high schools – but I don’t know for sure.

Here’s my thinking: If 2/3 of eligible students aren’t attending traditional high schools, it will be very difficult to justify keeping them open.

Remember: LeVine’s plan only has kids spending 1-2 days a week in an academic setting – which doesn’t necessarily mean at school – it could be defined as visiting an off-site drop-in center run by a community partner or having kids log-in to software from home.

LeVine also loves the idea of project based-learning. So, maybe public high schools will be replaced with charter schools like the one operated by Big Picture Learning in partnership with the Highline School District.

In any of these scenarios, after kids, teachers will be the biggest losers.

I’m anticipating – once the downsizing begins – teachers: whose salaries are one of the bigger costs of running a school – will be laid off, replaced with non-certificated staff such as AmeriCorps or TFA, whose job will be to monitor kids’ progress on educational software.

If my hunch is correct, this would be two huge wins for the Legislature.

First, they don’t have to find any new revenue to finish the job on McCleary. Plus, laying off teachers can’t help but hurt the teacher’s union.

Is Anyone Protecting the Interest of Students?

Given the major disruption career connected learning would bring to our public education system, who is looking out for the kids?

Initially, I had hoped one state agency – the Office of Superintendent of Public Instruction – would stand up for students’ right to a high school education steeped in the liberal arts.

You know, the type of education the kids of rich people get – what Bill Gates and his kids experienced while going to Lakeside or what Chicago Mayor Rahm Emanuel’s children were exposed to at the prestigious University of Chicago Laboratory Schools. Schools where kids are taught to be leaders, not treated as cogs to be retrofitted to suite the corporate machine.

Unfortunately, my hope was quickly disproven.

In fact, Chris Reykdal, Superintendent of Public Instruction, was at the same STEM Education Innovation Alliance meeting as LeVine and had this to say about career connected learning:

What are incentives for districts and how do we reward besides on-time graduation – do we have the courage to reward for technical pathways?  The framework needs to land on a policy platform that will work

I take this to mean that Reykdal is already working on how to sell career connected pathways to school districts.

So much for looking out for students.