Reposted with permission from Wrench in the Gears.

The rise of pay for success, social impact bonds, development impact bonds, and outcomes-based contracting will usher in privatization of vast new areas of public services, including education and training at all levels from infants through human resource management (lifelong learning, reskilling). This is not merely a phenomenon of the United States; this summit is intended for a global audience, a neocolonial project driven by late-stage capitalism.

Business executives, government officials, and representatives of non-profits and NGOs from across the globe will gather in New York City this fall to discuss the business of early childhood. These are not people looking to open childcare franchises. No, that is not their “business.” The intent is more sinister, transforming our youngest learners into points of profit extraction under the guise of social justice and equity. Through technology and forms of “innovative finance” they aim to catalyze a speculative market in toddler data, using the lives of young, vulnerable learners as vehicles to move vast sums of social impact venture capital.

ReadyNation, a program of the Council for a Strong America, is hosting the summit, set to take place at the Grand Hyatt Hotel on November 1-2, 2018. Council for a Strong America, a bipartisan coalition of leaders from the law enforcement, military, business, religion, and athletics spheres, has placed influencers guiding early childhood education policy in every state. Their intent is to promote public-private partnerships that will generate investment returns for global finance while shaping children into a compliant citizenry conditioned to accept economic precariousness and digital surveillance while doing the bidding of the power elite.

The rise of pay for success, social impact bonds, development impact bonds, and outcomes-based contracting will usher in privatization of vast new areas of public services, including education and training at all levels from infants through human resource management (lifelong learning, reskilling). This is not merely a phenomenon of the United States; this summit is intended for a global audience, a neocolonial project driven by late-stage capitalism.

Remember the 2007 housing market crash? The fraud Goldman Sachs perpetrated, misleading investors to purchase financial instruments tied to sub-prime mortgage bonds? The $16.65 billion penalty Bank of America had to pay, the largest settlement between the government and a private corporation? Seeing financiers from both companies on stage at a 2014 ReadyNation event promoting early childhood social impact finance should give us pause. Watch the hour-long talk here. The excerpt below is taken from a two-minute clip where the moderator, Ian Galloway, introduces a panel on potential financing structures. Watch that here.

To dig the hole deeper, the Council for a Strong America has accepted over $10 million from the Gates Foundation since 2006, including a $4.2 million grant in October 2015 to “engage stakeholders around the Common Core and high quality preschool.” Last summer in the run up to the fall 2018 elections, Gates granted the organization $300,000 to “educate potential future governors about the importance of college and career readiness in their state.”

What do summit attendees get for their $200 registration fee? ReadyNation touts the event as “the only training ground in the world for business people from outside the children’s sector to become unexpected and uniquely influential advocates for public and private investments in early childhood…Summit attendees from the U.S. must be business people or public officials; those from outside the U.S. can come from other sectors.” Children’s advocates and policy experts in early childhood education are specifically excluded from the conference unless they attend with at least four business people. In order to attend, one must to submit an online request. 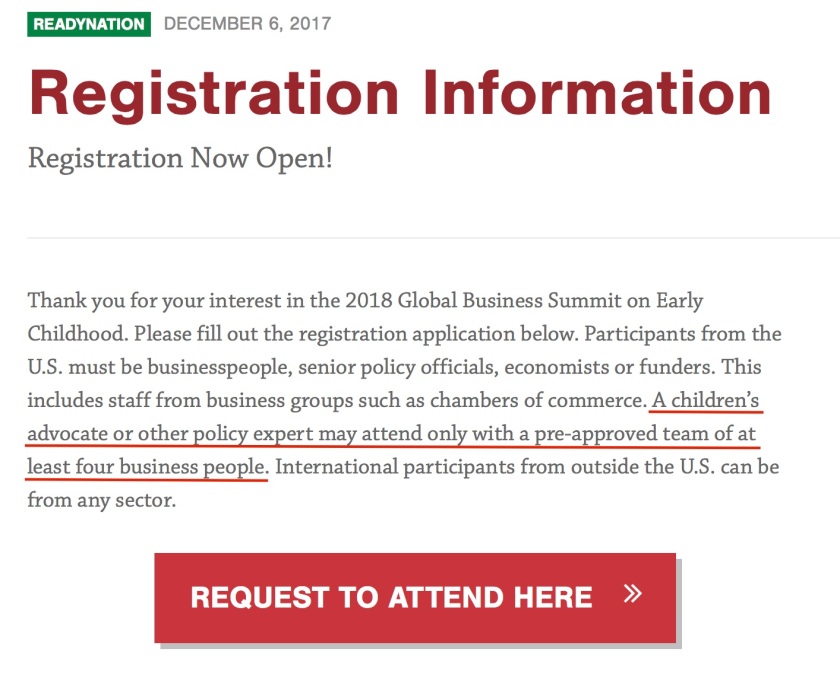 Why is ReadyNation so emphatic about excluding early childhood educators and policy advocates? Find out in Part 2: Making Childhood Pay: Arthur Rollick, Steven Rothschild and ReadyNation.