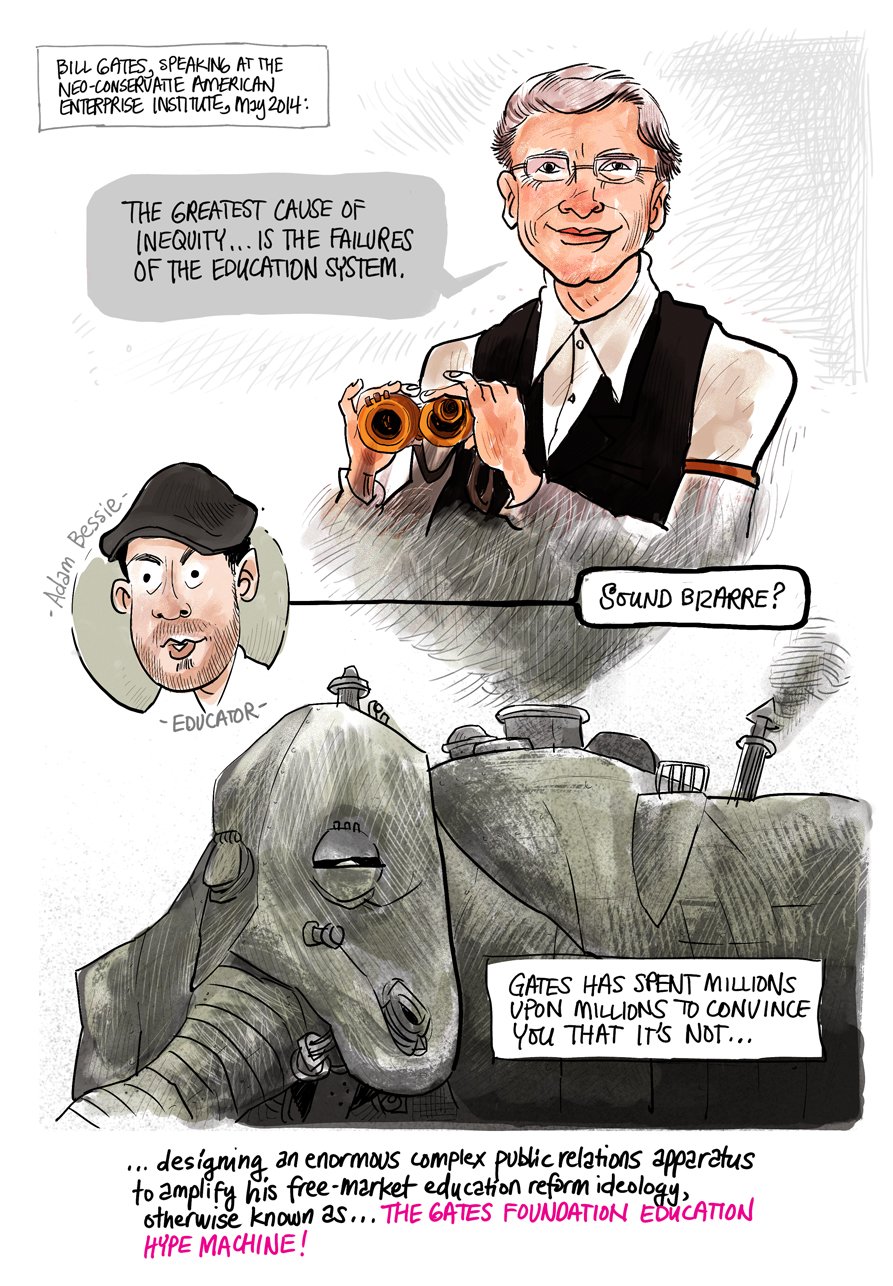 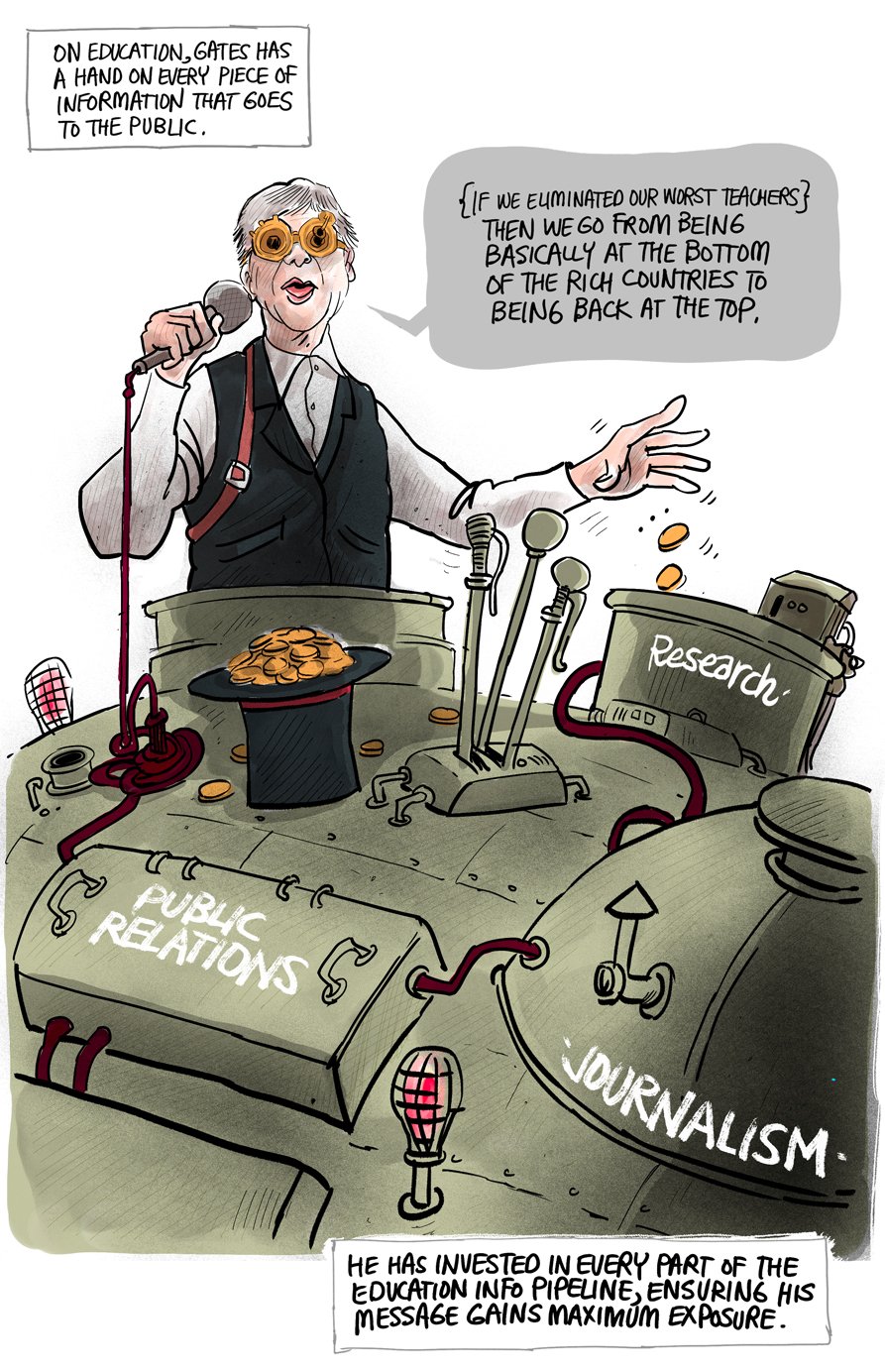 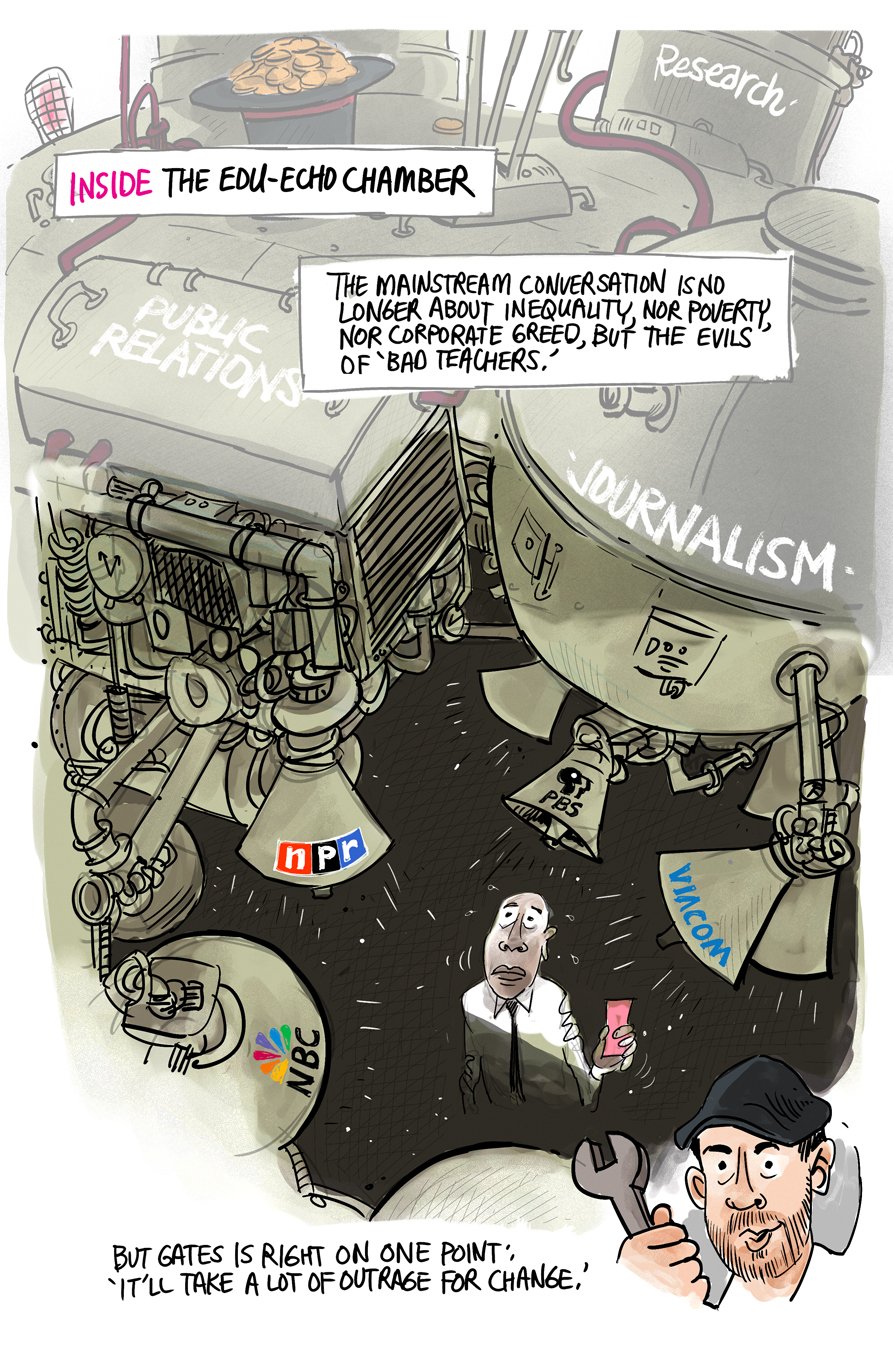 Gates has given over $4 million to the “pro-free enterprise” AEI since 2007, much of it to “influence the national education debate.” Click on the link to see the full conversation with Gates. http://www.aei.org/events/2014/03/13/from-poverty-to-prosperity-a-conversation-with-bill-gates/

Gates said this referring to the US’s educational rankings in a 2010 appearance on The Oprah Winfrey Show promoting the documentary, Waiting for Superman – a film that supports Gates free-market ideology. Gates also invested millions in this film (and appears in it). Click on the link to see the full text. The Shocking State of Our Schools, http://www.oprah.com/oprahshow/The-Shocking-State-of-Our-Schools.

Gates gave NPR 1.8 million for education coverage in 2013, and 3 million total since 2006.
http://www.gatesfoundation.org/How-We-Work/Quick-Links/Grants-Database/Grants/2009/11/OPPad17

At NBC’s 2011 Education Nation Summit, anchor Brian Williams: “Gates Foundation, one of the sponsors of this event, and the largest single funder of education anywhere in the world. It’s their facts that we’re going to be referring to often to help along our conversation.” Follow the link for more commentary. http://blogs.edweek.org/teachers/living-in-dialogue/2013/09/education_nation_2013_will_nbc.html

A 2013 PBS story on the Rocketship Charter School chain best illustrates the echo chamber effect of Gates funding. The PBS News Hour, the production company, and the school all received Gates money. http://truth-out.org/news/item/13732-a-model-t-education-public-schooling-on-the-assembly-line

Heard of product placement? Gates made a deal with Viacom (which owns Paramont Pictures, and a host of channels, such as MTV) for “message placement” on education reform. http://www.nytimes.com/2009/04/02/arts/television/02gates.html?_r=0

Thanks to Empathy Educates on putting this together.

By the way Mr. Gates, I have a Master’s degree in Architecture but after the crash of 2008 I did not have a full-time job until this year. Was it a lack of education, experience or knowledge that kept me from working full-time? No it wasn’t. It was the market. No one was building and no one could get a construction loan, even large companies with sterling credit. From the crash, millions have been laid off and the least fortunate of us have become homeless and 22% of our children live in poverty.

I don’t know what your fixation is on teachers and our woefully underfunded education system but your vision is myopic. Your ideas will fail because they are not based on reality.

The reason you succeeded is because of the great wealth of your father and your ability to break anti-trust laws probably due to your father’s expertise in law so don’t tell the rest of us, or rather, force the rest of us, to take on your ideas. They have no merit.

What YOU need to do is focus on getting our economy back on track and our schools fully funded by bringing unpaid corporate taxes into our economy, back into the United States, the place where you made your fortune. YOUR focus needs to be on ensuring that students who graduate from high school and college have jobs. We’ll take care of educating them.

I’ll end with Cenk on The Young Turks:

One thought on “Bill Gates: An infographic”