We sent the following question to then Candidate for State Superintendent Chris Reykdal on October 6, 2016:

“Given the legal uncertainty of charter schools in our state, as head of the (Office of the Superintendent of Public Instruction) OSPI, would you distribute the Federal money to the existing charter schools and provide funding to set up new charter schools?”

This was Mr. Reykdal’s response:

“I am very troubled that our state pursued federal funding for charter expansion before the substantial legal questions surrounding charter schools in our state have been resolved.”

“I do not think it is appropriate to allocate these funds to existing charter schools or expansion of charters until our courts have ruled on the pending lawsuit.  That said, this allocation question will most certainly be settled before the next Superintendent is in place.  By then, the courts may have also settled the constitutional questions.  So the question, as posed, gets at our philosophy as OSPI candidates, but not likely our ability to influence this grant, short of a court determination that charters in our state are unconstitutional.”

(The underline is by Chris Reykdal.)

Now, even though the Supreme Court in Washington State is to hear arguments this month or next on the constitutionality of charter schools in our state, the following flyer was tweeted out by the now State Superintendent Chris Reykdal’s office recently: 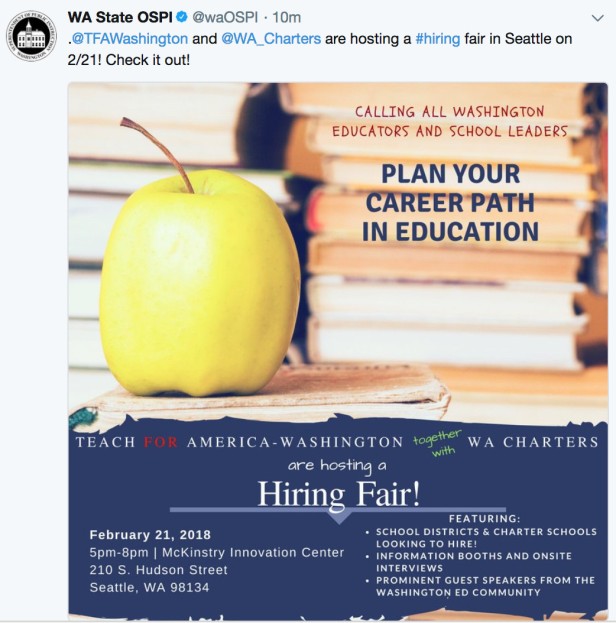 This flyer targets teachers and the hiring event is sponsored by a group calling themselves the Washington State Charter School Association, which is heavily funded by Bill Gates, along with Teach for America, Inc., a company that hires recent college graduates, no experience of certification necessary, to populate charter schools as teaching staff.

What OSPI fails to mention in their tweet is the present court challenge on the constitutionality of charter schools in Washington State led by the League of Women Voters, El Centro de la Raza and the Washington Education Association.

We know Bill Gates, a proponent of charter schools, has been giving money to OSPI for years, even though we question a private foundation donating to a public, and state, institution. Could it be this reflects Gates’ influence on Chris Reykdal and OSPI?

Charter schools are a privatization of a public good where money trumps students and TFA, Inc. churns unqualified teachers through charter schools and all at a price to school districts and communities.

For more on charter schools, see:

On Contact with Chris Hedges: The Rise of Charter Schools with Diane Ravitch

The NAACP calls for a moratorium on charter schools

How privatization of schools (charter schools) works: An infograph

What is a charter school?

Firing Day at a Charter School

For more on Teach for America, Inc. see:

Colonizing the Black Natives: Charter Schools and Teach for America

Does Teach For America advocate for equity and access? Whistleblower says no, files lawsuit

10 things you should know about TFA corps member realities

5 thoughts on “Hmm, I didn’t know our State Superintendent was in the business of selling charter schools and Teach for America, Inc.”